RSR memories: Influenza vs Covid-19 and their progeny

As with most research by most scientists, a recent publication I coauthored in Nature Scientific Reports on Covid-19 and atmospheric virus circulation [1] only represented a fraction of the information I explored. Much of that research involved detailed examination of Covid-19 and Influenza official surveillance numbers from around the world, in addition to communications with epidemiologists, virologists and antigenic testing experts. Our paper noted that modern pandemic and ordinary viral surveillance may have been compromised because antigenic testing seems to have been sidelined. So, I guess any health care expert cannot afford to dismiss that paper or this blog post: Will the CDC’s Right Size Roadmap (RSR) for viral surveillance diminish to a faint memory? Or can due diligence and accurate testing be returned before it is too late? The cure seems simple: more transparency. I’ll work on this post as I un-bearth one more deep dive into antigenic and related testing, which applies to such surveillance.

In the featured image at the bright right, the real RSR once clearly followed procedures and guidelines to understand circulations of respiratory viruses of all stripes. Notably, purely genetic testing such as “PCR” tests weren’t invoked until Step 3. In contrast, the left frame for Covid-19 follows its own obscure rules, if any. One thing is clear however, purely genetic testing has jumped to Step 1. That already defeats the purpose of surveillance.

I guess I’m being too generous with that statement, as there are decades of data to work from that document the irreplaceable role of antigenic testing and its order in the surveillance process. Without antigenic testing studies to inform and validate, no Covid-19 accounting of case numbers or vaccine effectiveness or other treatment can be determined to be effective or not.

What happened then to antigenic testing? That was until recently, the only logical role for Step 1. Ultimately we always ground truth to Nature, and not to artificial CRISPR constructions. Accordingly, health workers typically and successfully found proxies for our most serious sniffles from rather cute ferrets. Here’s a sample photo of the still rare black footed ferret from a Smithsonian Institution publication.

After exposure to the virus of concern, a domestic ferret will get sick much like we do, and will produce antibodies. Those harvested antibodies will immuno-fluoresce in various custom test kits and others, when exposed to the same antigen as identified for human conditions. Any circulating virus can be adapted to an antigenic test kit, with the help of the ferret or often other mammal species. Again, this means that we don’t lose track of the virus. The trail from our illness to the fluorescent ferret antibodies is straightforward and relatively unequivocal.

Even then, it is best in surveillance to test for more than one virus at a time. No worries, as many antigen test kits are available. And although antigenic tests are are reassuringly very specific, when it comes to Covid-19, other coronaviruses, influenza, respiratory synctial, and many other diseases and their progeny, the concerns of the CDC and the FDA suddenly appear to be entirely about false negatives. Yes, they appear to require that the antigen test prove the negative, which is relatively impossible.

I’ve checked a few times, although I still may have overlooked something somewhere, but none appear to be sufficiently concerned over the false positives for any of the Covid-19 tests including the genetic ones. In a false positive case, you don’t have the illness, but the test says you do. Imagine if without initial disclosure, the medical community replaced accurate cancer tests with inaccurate highly false positive ones. You’d want answers.

If a return to guarding against false positives were activated, then antigenic tests might stand out for their worthiness in this category. In other words, if you don’t have the illness, the antigenic test won’t usually signify that you do. If only PCR testing could be so trustworthy. The new antigen-free approach to respiratory viral surveillance has therefore not only tipped the playing field, but scorched it as well.  Now all bets are off.  Official reports of case numbers, hospital numbers, vaccine efficacy claims, new treatments and mandates are all now pipelined through apparently political machinery that filters out all rational testing protocols, especially the antigenic ones.

Viral jargon and cladistics, and antigenic strain IDs are rooted in conceptions about viral procreation. A very helpful site that seems to tie a lot together for me can be found at this paper on overlapping subjects. Again, the phenologic clad diagrams such as this adapted from the same source, nextflu.org as above.

This mutational inheritance convention is suitable for lineages as well. And no virologist would likely disagree that more than one virus can inhabit an infected cell at any one time. It begs a question on whether or not viruses are in part using cell machinery to sexually reproduce while they electrophoretically pilot their way around a cell’s estate.

I only wish I could someday tie up all of those speculative loose ends and detours. They really do relate to this antigenic topic. But perhaps a return to the beginning of this post is best. There I re-introduced a news item that viral surveillance has been altered, perhaps beyond recognition. This seems to remain inexplicable, but I’m always interested to communicate with other experts in information dispersal. I did reach out to various media and subject matter experts, too many to detail in a blog, but I recognized a year ago that antigenic testing questions would not receive a warm welcome.

As a researcher of Covid and Influenza seasonal atmospheric circulation, I relied upon the published results of antigenic tests in part for validating the mutually exclusive populations of Seasonal Respiratory Viruses (SRVs). I also benefited from many published papers to inform our study and its direction. Here’s an example coauthored by a local researcher that probably could not be more relevant. I’ve highlighted a few items to save time for the reader.

The paper, along with many others, confirms that Antigenic based studies are required for evaluation of Covid-19’s (the SARS-CoV-2 virus) closest and most dangerous relative (the SARS-CoV virus). This means that antigenic testing is not optional.

Yet that testing is no longer publicly happening. Again, no disclosure or rationale has been provided by any in the medical community. While the rest of us are swept up in a wave of apparently irreproducible testing and mandates, antigenic and related subject matter experts don’t appear to have any current public concerns. Any, including the most politically-paralyzed lawmaker or media personality, could however reach out to each of the authoring institutions cited above to understand and share why antigenic testing and the RSR have now been eliminated and replaced with arbitrary notions. I do hope they will attribute abeqas.com or related parties, since we were the first to introduce this concern.

I’m curious about antigenic studies in addition because of the local connection of the above paper to Lovelace Respiratory Research Institute (LRRI) in Albuquerque. I know that antigenic challenge studies have been their bread and butter. As a younger entrepreneur leading Global Haptics, Inc., I was solicited by the new LRRI to lease space at their facility. It seemed odd even then, but I nonetheless toured the grounds and saw beagles, primates and more, all of whom were involved in antigenic (or even more serious) challenge studies. Moreover, early last year an LRRI leader suggested that such challenge studies could be applied to test our own theory on pollen and viruses. That seemed to me to be a most welcome prospect. Then they stopped communicating. When communications fail, other notions fill the void. Are LRRI and others conducting antigenic studies on Covid-19 and its progeny, or aren’t they? And if LRRI is studying that, who receives the results, if not us?

I proposed that the playing field has been tilted and scorched for respiratory viral surveillance embodied in the former RSR, such that all bets are off. Now without the protections and verifications of the RSR, public assertions of vaccine or treatment efficacies, or simply of case load numbers, seem to only be what the public health officials and media broadcasters say they are. Only yesterday I listened to part of an NPR piece 10:45 am on 24 Nov from KANW, on new and “promising” Covid-19 treatments. The journalist Lev Facher, who cited “Céline Gounder, a physician and NYU professor” and “Adam Gaffney, a Harvard Medical School professor” stated that PCR tests were the most accurate of two test approaches. I didn’t hear them mention the other type of test but it may have been antigenic. If so, the radio program and the experts they utilize would have been misrepresenting the facts. Accordingly, I posted a comment there to request they issue a correction. Time will tell if the comment remains and we might all benefit if NPR choose to cover all sides, as taxpayers expect them to.

Antigenic tests are the most specific of all, and therefore they are the most accurate. The genetically crispy PCR tests may be precise in extracting a cladistic branch (see the doggy family tree above) but, without the foundational protocols of the RSR, including antigenic validation studies, that is all that can be said for them. Again, the new approach appears guaranteed to lead to vast numbers of false positives.

We all have a currently unfulfilled right to RSR compliant, transparent and reproducible State and CDC tabulations of Covid-19 and progeny cases, along with the same for all of the other seasonal respiratory viruses. This also applies to vaccines and other responses to those agents. All of this is impossible without public studies which incorporate broad spectrum antigenic testing.

You may argue over the dinner table all you like, but if the antigenic testing question were no worry, then reproducible answers would be forthcoming. Why consume that Covid-19-vaccine-mandating turkey without a second thought? It’s interesting and in this case perhaps more important than ever, to ask a question which affects your life but which authorities and those who broadcast our news choose not to answer.

The Flurona strains seem puzzling to the media, but further corroborate the Covid-19 and seasonal respiratory virus posts here at abeqas.com. This is especially resonant with regard to antigenic testing and mutually exclusive populations of viral strains including all coronaviruses. Perhaps, as posts including this one have anticipated, the true natures of the circulating respiratory viruses are coming back to light. In addition to working to raise awareness of antigenic testing and the RSR, I had proposed more open home antigen testing. The current crunch in the availability of those kits also corroborates the above,

Finally in this brief update, the former Surgeon General of the US, Dr. Jerome Adams, recently and perhaps for the first time publicly said the words “antigenic testing”. This is encouraging from my point of view and may relate again to the hopefully imminent restoration of the CDC’s viral error-checking protocols known as the Right Size Roadmap.

These updates appear to reinforce that without the RSR, nothing passes the antigenic smell test.

Contains opinions about data All outside images cited and fair use in each case. 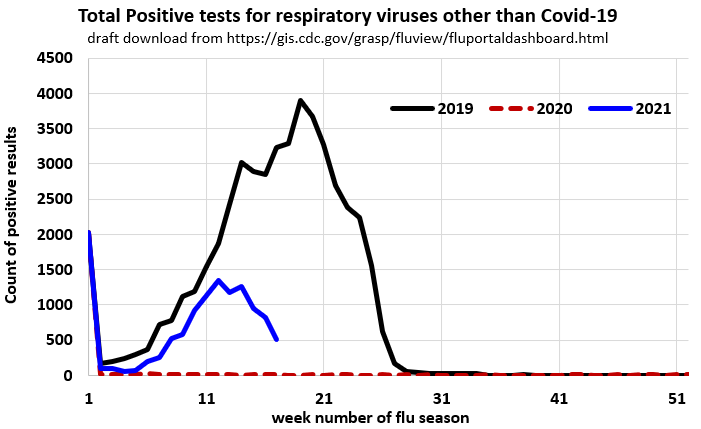 Covid-19 versus the reality of SRVs 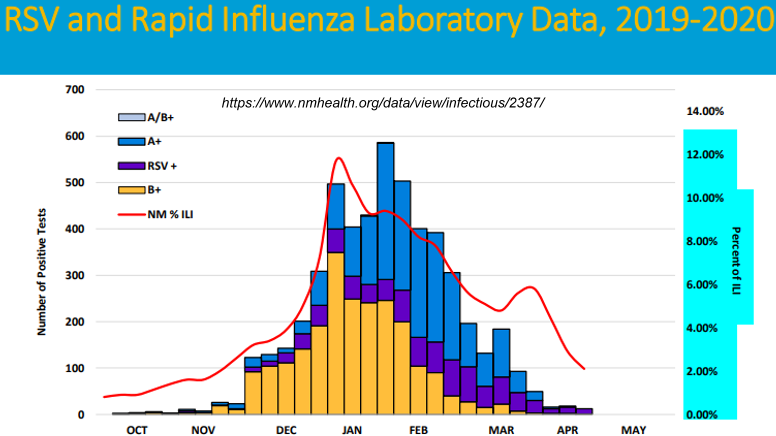 Respiratory viruses that are included in RSR protocols