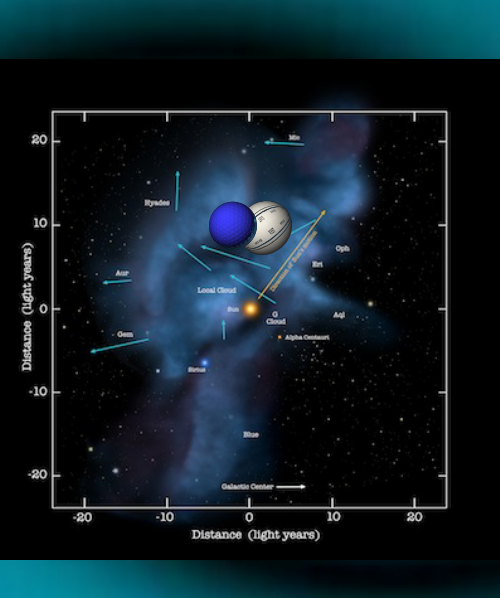 Climate Signatures of the Interstellar Medium (CSIM) is the scientific foundation of everything at this site, and for inspHiration, occasionally has a feedback loop with a time-traveling, space-warping semi-satirical counterpart.  Both were inspired from a dinner at the Pied Piper Saloon over the 2011 AGU conference in San Francisco.  The finest Interstellar dust and Hydroclimate scientists of their generations attended, and for the first time ever, the problems of the universe were solved once and for all.

But life went on and so this site often examines to what degree sunspots control our planet’s climate.   In an interesting symmetry, planetary tides of Jupiter, Venus, Earth and Mercury in that order may influence those same sunspots.  That would be some feedback.  For example, Dr. Lanza wrote [i]:

On the other hand, magnetic loops interconnecting the star with the planet may be stressed by the orbital motion of the planet and dissipate powers up to 1020 − 1021 Watts, that may account for chromospheric hot spots moving in phase with the planet rather than with stellar rotation.

schematic over SSN example. These planets are not to scale but relatively sized according to the magnitude of their (all minor) tidal effects on the Sun

In fact many studies have noted that sunspots express an 11 year cycle and Jupiter circles the Sun once every 12 years.  This planetary sunspot-forcing theory appears to be gaining traction.  Now that extra-solar planets can be inferred based on the changing luminosity of the host stars, this notion is even being applied to other stars.   A recent paper  by Stefani et al [ii ] claims an interesting match between these very items, namely, the minimums of the Solar Cycles (the approximately eleven year Schwabe Cycle)  and the maximums of the Venus-Earth-Jupiter alignments. 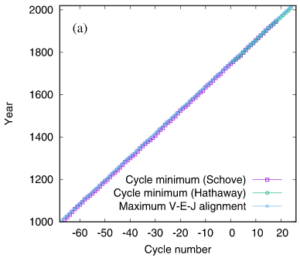 fair use. Source Figure 1 of [ii]  and I don’t buy it as this and another post may detail.

In real time, somewhat, I’m examining this Stefani et al paper.  I was interested to understand how they claim such excellent fidelity between solar cycles and planetary alignments.   As much as I’d like to confirm, because this is really an appealing concept, I find a number of reasons to return to skepticism.  The Schove reference [iii] in the image is a “red flag”.   I don’t mean red flag in the bad kind of way, but because it is not reproducible.  I’m actually an immediate fan of that scientist.  Schove’s 1950s era “Spectrum of Time” project [iv]  was ambitious and as fascinating as an earth scientist or astronomer might ever consider.  And it is more commendable than most climate papers are to this day, simply because he really put it out there, with actual projections of solar cycle highs and lows out to the year 2025.  I’ve plotted his projections over the actual record to date below: 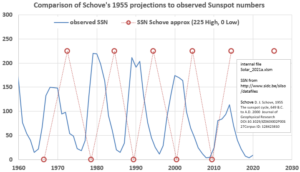 Given that the Schove projection has turned out to be so poor, I for one doubt that his hindcast of SSN highs and lows going back in time over a thousand years is very reliable either, although I admire the effort.   I do think the Stefani team should have reflected this poor forecast record by Schove.   The rest of their extensive dynamo-math means little at least to me if they can’t be transparent about that.  Indeed, it wouldn’t have been hard to tabulate and plot in great detail the past few decades of both SSN max and min and V-E-J (Venus-Earth-Jupiter) alignments, but they did not.  One cannot even find the actual SSN values traced over this recent period in their Figure 1.

Perhaps planetary tidal forces as a cause for SSNs still might be demonstrated some day, but in any case, questions like these also fit within an even broader climate concept, that of the Sun’s path through the Interstellar medium (ISM).  By 1939,  researchers speculated on the InterStellar medium (ISM) as a causative agent  for multi-millenial glacial climate oscillations [1].  By the mid 1970s, so called Climate Signatures of the Interstellar Medium (CSIM) researchers had access to improved observational and calculational technologies, as well as actual lunar soil samples.  This stimulated the ongoing efforts to relate ISM trajectories to climatic signatures on the Earth [2], [3], and [4].

The CSiM climate topics include the possibility that a periodic dust signature, covering at least one arc of our recent galactic revolution path (if not more), might provide temporal variations in some property that influences our Earth’s climate as it travels through. The implied impacts of the ISM upon the solar heliosphere and everything within, and the properties of the ISM required to impact climate on the Earth, are still poorly documented and more poorly understood.

CSIM enthusiasts hope to explore  among other topics, the open question of whether or not the  Extraterrestrial Dust Particle (EDP) signature over the past 1 million years of the Solar trajectory, can be reproduced conceptually and observationally.

Such a signature might be usefully evaluated against Earth’s past climatic history of the same time frame.

The presence of a compression dust wave as one possible conceptual model for EDP localization has been inferred in the recent past (Frisch and Mueller, 2011 [5, 6]) and might be further detailed, or otherwise supported at some time by remote dust or mass measurement techniques [7] applied toward the direction we came from (Sirius) and towards the direction we are heading (Vega), as well as the path between.

Ongoing explorations of the Local Interstellar Cloud, and the Local Bubble, and related timings of local supernovae are suggestive of support.

CSIM can also be broadly interpreted to cover ALL climate signatures, given that the solar system itself and everything within, are part of the ISM.  In particular, CSIM promotes stochastic explorations of the logical Solar and Orbital time series features in an integrated manner with hydroclimatologic index mainstays.

Interstellar dust can be above room temperature.  Internet sources indicate a temperature for some of these dust clouds of about 300 K. 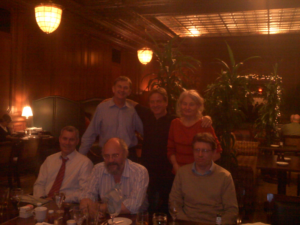 CSIM’s premiere “Beer Review” session at AGU 2011 conference. I was lucky to surround myself with such top scientists if only for a brief and astronomically dark period.

Copyrights 1966 to 2019  MW&A  all rights reserved.  Largely adapted from an introduction to a work in progress.  Featured image adapted from https://wallacemichael.tumblr.com/ and from [5]. 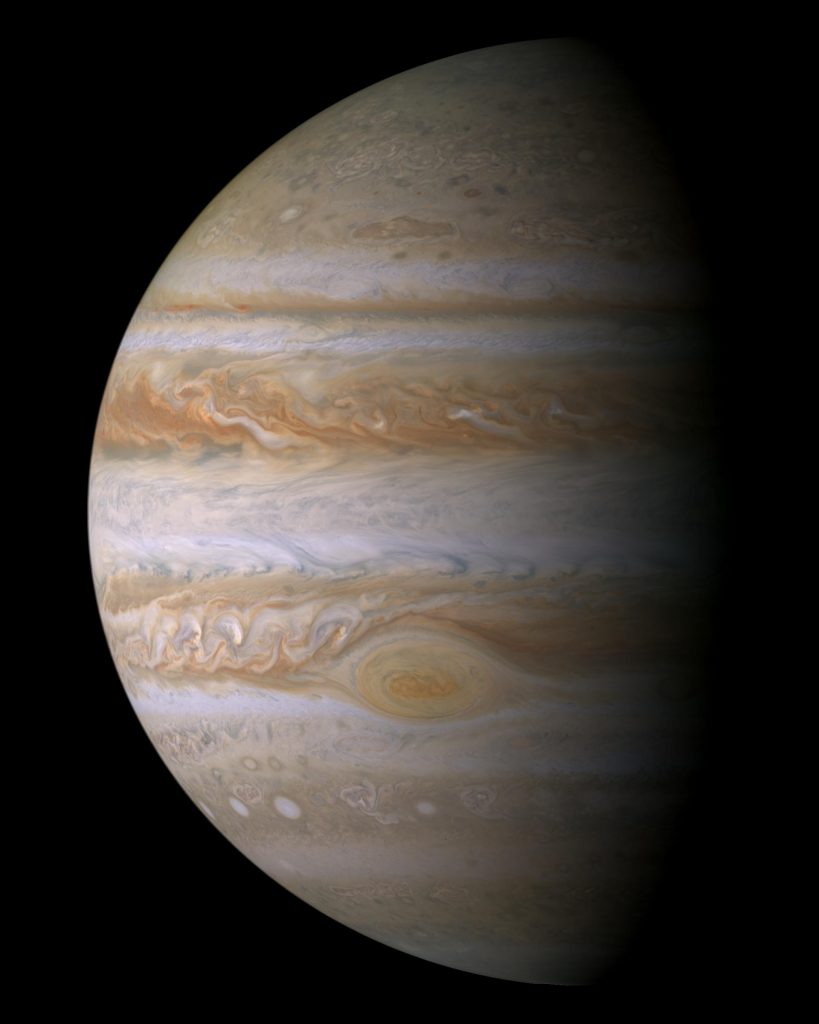