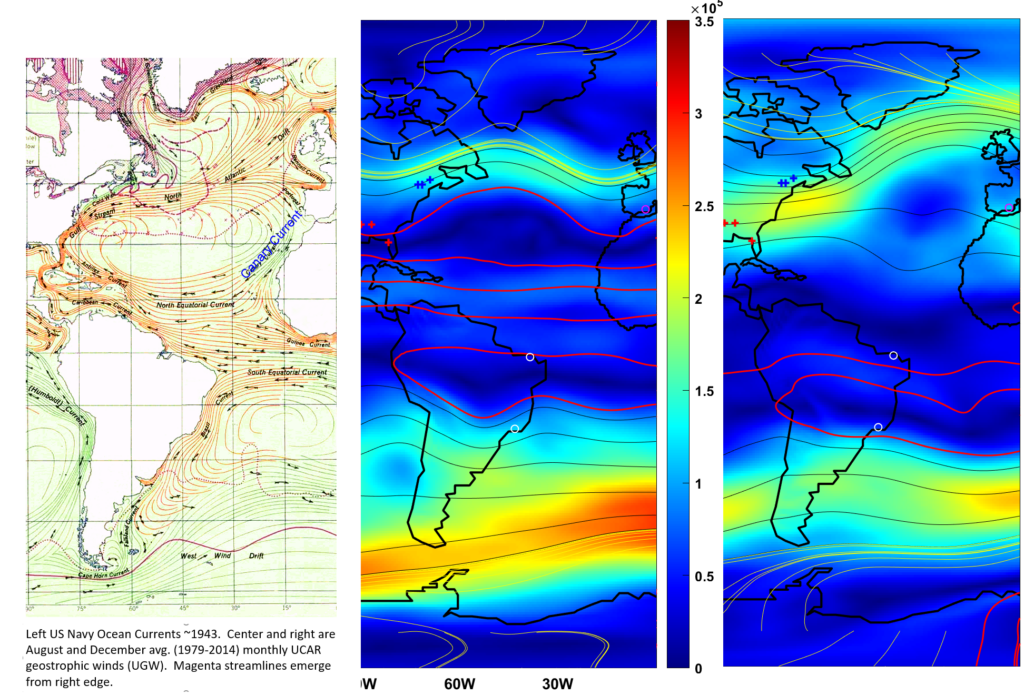 Media including the Irish Times (IT) reported that the Atlantic Meridional Overturning Circulation (AMOC) has been weakening due to climate change.  The article noted that by virtue of the weakening AMOC circulation, we are one less “tipping point” away from runaway climate change.  Oddly, the article does not actually cite any particular paper.  Nor does a related article by the New York Times.

But I found recent papers by overlapping author teams among those the IT quoted, that are more accessible on the same topic [1,2].   Both references [1] and [2] describe a weakening of the Gulf Stream (GS) since the 1850s, which they designate as the end of the Little Ice Age (LIA).   Perhaps the GS is weakening, but what’s perhaps of greater interest is the cooling which is apparent across the Arctic.    This is evident from Figure 2 of the first reference, which I’ve excerpted for the featured image below.  The blue shades indicate cooling. Clearly according to this study, the Arctic is significantly cooling both through the suggestions of their model on the left and their observational (HadlSST) data on the top right.

The focus of their study was actually the red blobs that signify the GS.   But in any case their Figure 3 excerpt below also indicates by the dark blue line (sg means sub-polar gyre) that the Arctic must be getting colder, does it not? Source for featured image and this image [1]

From a draft global geostrophic perspective, there is some warming across the Northern Hemisphere and it seems amplified in the Arctic.   The debate featured in this post seems to be best highlighted among those researchers who are chained to the emissions causality argument.  In other words, either the Arctic is cooling or it is warming, but it cannot be reaching new records for both, simultaneously.

Above, I focused on what seems to me to be a major inconsistency between AMOC theory and Arctic warming:  Both cannot be right.   But in fact, there are AMOC researchers who believe that the AMOC is not slowing down at all [3, 4].  I’ve made a composite of two of the opposing paper titles below, one from the amoc-weakening and one from amoc-strengthening camps.

This might be interesting to reconcile.  If the AMOC is a real thing and it is behaving normally, perhaps that IS in line with Arctic warming.   It seems worthy to revisit the AMOC against the previous and co-existing noted global ocean circulation parameters.  Fortunately maybe, this impact is suddenly hotly debated outside of mainstream media.  And no disrespect to any side  intended because I do like the symmetry of the Thermohaline Circulation (TH).  As at least one colleague has also noticed, it is somewhat to the bottom of the hydrsophere as the Brewer Dobson (BD) atmospheric circulation might be to the top of our atmosphere.   I think that the sensitivity of the climate to the TH may be magnified out of proportion to the energy balance conditions of gyres and upwelling.  For example, the figure below from NOAA maps the zones of ocean upwelling, at various seasons.  It seems clear that upwelling at some annual interval occurs almost everywhere that there is a coast.   Accordingly, upwelling appears to be occurring in the same areas that the AMOC defines downwelling I love this old US Navy map (1943) of ocean currents below.  It depicts warm currents in red and cold currents in green.  One can see the warm Gulf Stream for example grazing the east coast of North America.   Epically massive ocean width-spanning gyres are clear in the naval map by the vast spaces anti-cyclonically swirling clockwise in the Northern Hemisphere and counter clockwise in the Southern Hemisphere.  The Gulf stream for example is  known also as the west end of the rotating mid Atlantic gyre, picking up warm waters from the tropics and conveying that warm water to the north where it spills out across the North Atlantic. Here is a closeup of the AMOC footprint, without its overlay.  I do have it placed alongside recent work of mine on August (center frame) and December (right frame) geostrophic wind patterns.  The geostrophic wind frames reinforce synchronicity, likely always in fine tune with the ocean currents.  How could it be otherwise, given that the ocean gyres are saddled between fast higher latitude westerlies and slower going easterly equatorial troughs. This independent work happens to also then support the oceanographic argument that winds drive currents.  Any good oceanography treatment will show how winds drive the giant anti-cyclones in the oceans as well as in the atmosphere, and these interesting frames above might corroborate.  In the relative geostrophic blink of an eye, many interesting similarities between winds and ocean currents are just waiting to be further quantified and exuberantly compared to the gyre-and coastal upwelling- blind models of the AMOC by the UK Met Office: Did either the Irish Times or the UK Met Office AMOC authors misinterpret the the Gulf Stream along with the major Atlantic ocean gyres of the north and south hemispheres?  Somewhat like Frankenstein’s inadvertent monster, as suggested by a schematic in the Irish Times article, they possibly have re-appended the head of the North Atlantic gyre to the trunk of the Gulf Stream. Either the Irish Times or the UK Met Office must be wrong.*  In this policy-rich world, the AMOC flows like a firehose through the Gulf Stream, then seeps like a leaky pipe along the depths of the Atlantic from the North Pole to Antarctica.  Yet what happened to the Canary Current?  It is just across the Atlantic from the Gulf Stream, and on the edge of the same gyre, with an annual flow of ~75 Sv of Canary Current flow southwards possible at times.  The AMOC is only measured within the North Atlantic Gyre, via a few RAPID** stations making a transect across latitude 26.5 N.      Here’s a schematic from their site. What happened to the Canary Current?

I can search AMOC papers  for any mentions of “Atlantic Gyre” and “Canary Current”.  If neither are found, then  it seems out of balance to me at least.  I’m glad to see that the more scientific reference [4] does recognize the Canary Current.  The papers of [3] and [4] are contemporary, so again there appears to be an actual debate playing out behind the press, but within the peer review community.

This has been somewhat rare on a climate change front, to gurgle against the media surface, so I’ll revisit at times.   As reported by the single-sided NYT article:

“We’re all wishing it’s not true,” Peter de Menocal, president and director of the Woods Hole Oceanographic Institution, said of the shifting ocean currents. “Because if that happens, it’s just a monstrous change.”

*It’s also possible that both are wrong.  The null hypothesis hasn’t been overruled yet.

**surprisingly, the acronym RAPID is not defined.

Solar cycles might drive the advance and retreat of Himalayan glaciers. 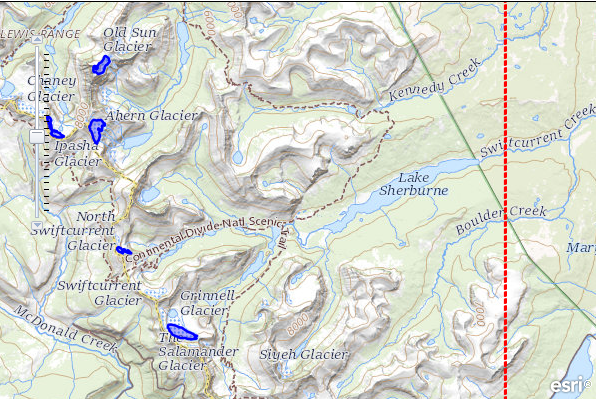 Getting canceled for challenging the consensus can be expensive.