There is no shortage of mysteries concerning influenza (the flu), obviously.  Like most people I am not sufficiently informed about this topic.  On the other hand, many relevant researchers often puzzle themselves over the connection between influenza and climate [1].  I’ll take a chance then on writing about this  from a climate perspective along with a notion about pollen.  There also happens to be a New Mexico connection to early studies of the Spanish Flu in 1918.  The featured image was cropped from a Wikipedia page [2] showing the crucial setting outside of Deming, New Mexico for that year.  I’ll return to this shortly.

First as many know there are some distinctive climate patterns to the flu and they appear to lead to contradictory notions.   Consider the title to Reference [1] (my bold), “Study flu likes weather cold and dry or humid and rainy.”  This at least seems nominally contradictory, but there is a global climatological foundation.   That reference notes that influenza is most active in temperate zones over the winter season.  The reference indicates that closer to the Equator, people can catch the flu any time of the year and there is not a clear seasonal pattern.

As reported there, a National Institute of Health (NIH) study evaluated “85 studies conducted from 1975 to 2008”.  It followed to indicate that (my bold):

By comparing the flu patterns and climate data, the researchers found that temperature and specific humidity were the best individual predictors of peak flu activity, the NIH release said. They determined that in temperate regions, flu was more common 1 month after periods of the lowest specific humidity, which coincided with the coldest months.  “In contrast, sites that maintained high levels of specific humidity and temperature were generally characterized by influenza epidemics during the most humid and rainy months of the year,” the NIH said.”

The reference notes many additional observations and I only scratch the surface.  To reinforce here is another quote regarding atmospheric conditions that relate:

“For sites where specific humidity was found to be a good predictor of flu peaks overall, this was mainly due to its performance in higher latitudes, the authors write, adding, “In low latitudes, precipitation was a stronger predictor of the timing of influenza activity”. Reference [3] is complementary and notes among other things the longstanding notion that cold weather can trigger a flu.  They write:

“..even its name, “influenza” may be a reference to its original Italian name, influenza di freddo, meaning “influence of the cold”.”

The reference tabulates the most common explanations for influenza in temperate zones:

This reference goes into some interesting directions to me at least, starting by citing work by Lowen et al. [4].  Those researchers explored early work by a doctor who worked at Camp Cody Military Base outside of Deming, NM in 1918.  I include a picture of that base from that time, in the featured image, from [2].  This is only a blog so the reference does invite an additional nod to the base’s famous namesake environmentalist Buffalo Bill Cody, pictured below: Photo of “Buffalo Bill” Cody. Source US Library of Congress

The Camp Cody base had been hit by the raging Spanish Flu and he noted that the guinea pigs in his laboratory* were dying as well.  Lowen et al. (including Palese who is highlighted in [3]) were inspired from this historical observation.  They then experimented on guinea pigs themselves to explore some original notions that humidity and temperature might have some transmission influence on influenza.

“The data from these studies..(indicate that) higher numbers of flu infections (occur in) the month after a very dry period.. this is only the case in places that experience winter.  In warmer climates, oddly enough, flu infection rates are correlated most closely with high humidity and lots of rain..”

This may be where pollen comes in.  As I noted, I only know enough to be dangerous in this corner but studying nanoscience exposed me to numerous studies of microbes, pollens and more, and this is only a blog.  Here is a nice picture of a birch pollen grain and more to start: 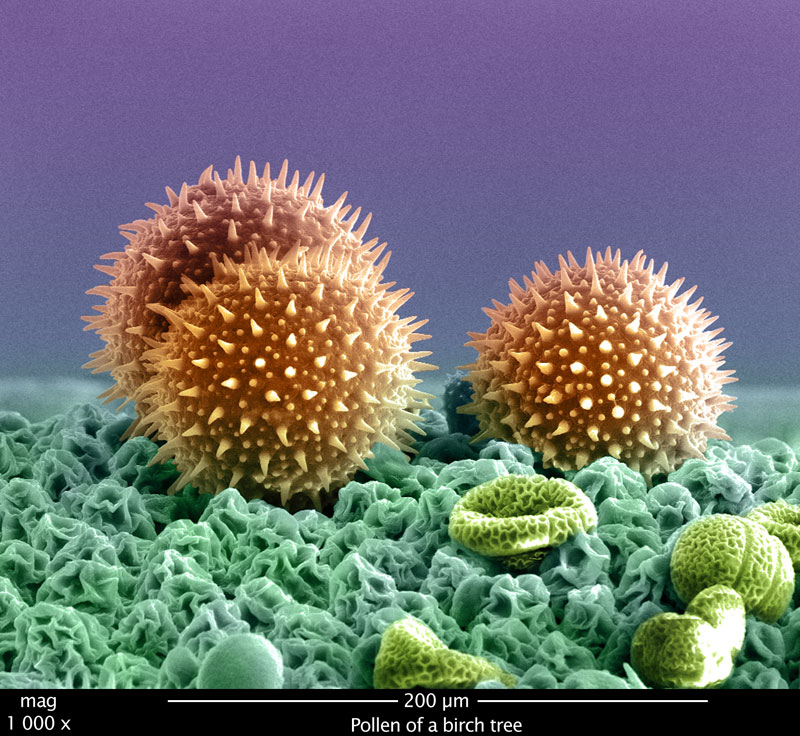 Source of above birch pollen  from [5]

Pollen is an antigen.  As I understand it this is only a question of degree for all humans.  Many, including myself, are very “triggered” and experience allergies as a result.

There are some connections in my superficial understanding, between those antibodies that are triggered by pollen [6], and the IgE antibodies which are promoted by flu vaccination treatments [7].

Yes I’m out of my depth, very much so.  But I can wonder whether the pollen doses we all widely receive might promote temporary immunities to various other antigens, such as the influenza virus.

In summary, researchers have noted the perplexing and somewhat contradictory connections between influenza and the change of seasons.  In temperate climates, influenza cases drop in the spring.  In tropical climates, influenza cases drop following rainy periods.  Researchers cannot seem to reach a common theory for these patterns.  They appear to focus on temperatures and relative humidity.  An alternate notion is explored superficially here that the presence of pollen appears to coincide to the important patterns, without any apparent contradiction.  Moreover, pollens are antigens which trigger the same types of antibodies which also nominally relate to influenza responses in humans.

Likely I should stay in my lane, but this is only a notion I explore, from a hydroclimatological and relatively shallow nanoscience perspective.  Perhaps straying in these pollen directions is not totally without some justification.  I took another look through the literature and found a reference to bee pollen and influenza [8].   Bee pollen has long been attributed to have excellent nutritional properties, for humans as well as bees.  It’s been a long time since I’ve tried any, but the reference is quite interesting.  Its abstract reports that “The active constituents of ..bee pollen conferring .. neuraminidase (NA) inhibitory activities (H1N1, H3N2, and H5N1) were investigated..” Certainly I’m not recommending to any that bee pollen consumption will prevent a flu and I don’t think the authors are either, although they note that very use in folk medicine.   In their study, they appear to have found that all of their studied pollen compounds “displayed inhibition of NAs in a dose-dependent manner”.  This is only a blog, and that was only a peer reviewed paper.  I’ll be curious to see if any others take closer looks (if they haven’t already).  Certainly at this point, the current strategies of flu prevention and/or treatment aren’t proving to be magic bullets.

Postscript:  There is an editorial in Fox News today authored by Marc Seigel which asks the same basic seasonality question as this post.  Any are invited to read it.  He supports a notion that humid air impedes the virus from traveling as far from any cough or sneeze.  He doesn’t include links but my guess is that they overlap with sources [1] and [3] below.  His notion however wouldn’t explain why influenza is not at all common in warm and DRY regions in temperate regions over the summer. The Western US, including New Mexico, comes to mind.  Moreover, the vast majority of even humid air is not dominated by water molecules.   The percentage of water vapor in such air is typically under 5%.  Perhaps an experiment would help.  They could spray the influenza virus into humid air and then dry air and examine the ground immediately.

I guess if anything, I will continue to explore the alternate notion featured at this post.  At least it is compatible with both Tropical and Temperate flu patterns.   Perhaps then, simply by inadvertently inhaling the natural pollens of our environments, we develop some temporary resistance to influenza strains, even if it gives some of us watery eyes and runny noses.  Or perhaps not.

Yet, according to my standard resource for rainy and dry periods, March actually is a rainy period for both Singapore and southern China.  And as I mentioned, rainy weather in equatorial and tropical regions is the weather in which more flu cases are noted.  So one wonders what he bases his “roaring” metaphor upon and why he claims it is not flu season there.

*Why was a remote 1918 domestic military facility in New Mexico experimenting with guinea pigs?  I haven’t read the original citation but I can guess.